Traditional sprinkler systems, in addition to their advantages, have one serious drawback, namely their launch is tantamount to flooding the protected object. Safe for the protected facility extinguishing systems with gas displacing oxygen from the room are very dangerous for humans. The solution that combines the advantages of the above solutions, and devoid of their disadvantages, is undoubtedly fog extinguishing. As of today, the costs of installing a fog system are not much higher than traditional solutions. 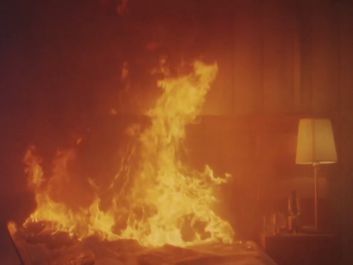 Firefighters determine the effectiveness of fog systems at 10 times greater compared to traditional sprinkler systems. Systems based on HP pressure pumps are characterized by many times higher operating pressure and therefore much higher extinguishing efficiency compared to older solutions where the source of pressure is a cylinder with carbon dioxide.

Thanks to the HP pump, the need for a CO2 cylinder, which is necessary in older solutions, has been eliminated. Carbon dioxide is an odorless and odorless gas and in higher concentrations highly toxic. Releasing more CO2 is extremely dangerous for humans, already at a concentration of 30% it causes immediate loss of consciousness and death. Accidental unsealing of one cylinder can cause a deadly threat to many people, which is why early carbon dioxide detection systems are installed in industrial halls.

Fog extinguishing is adapted to systematic launch and control tests, thanks to which even after a dozen or so years we can be sure that it is fully operational. In industry, reliability is paramount. Therefore, the TISSA fog extinguishing system is built in such a way as to maximize its reliability. Built on components of the world’s leading manufacturers of fire fighting fittings, it ensures efficient operation even after several years from assembly. Periodic checks allow you to quickly remove any hypothetical cause of disability. To perform the inspection, you do not need to interrupt work in the plant. Fog extinguishing systems are completely safe for working people. Systems based on CO2 do not provide such a possibility, so there is a risk that the system, which has not been started for many years, will not work in the event of a fire. The TISSA high-pressure extinguishing system allows you to set an automatic reminder to perform an inspection.

Unlike sprinkler systems, starting a fog system is not tantamount to flooding the protected object. The advantage of water mist is the ability to effectively clean the air from smoke, so that the damage caused by smoke is much less than when using systems based on oxygen displacement by CO2.

Fog systems are characterized by virtually zero operating costs, simple maintenance and a very long service life. Running the installation to check the correct operation is practically not associated with any costs. Such tests can, and even should be carried out, at least once a month. TISSA guarantees fast service and constant access to spare parts.

The effectiveness of water mist in extinguishing results directly from the degree of water fragmentation. Traditional sprinkler systems are characterized by drops of 1mm, where the evaporation area of 1l of water is 2m2, while fog systems generate drops of 10μm, which gives up to 600m2 of evaporation surface from a liter of water! 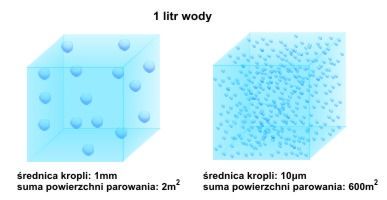 Displacement of oxygen from the combustion zone

Droplets of fog evaporate mainly in the zone of elevated temperature at the outbreak of fire. The volume of water after evaporation increases about 1720 times. The effect of this is that oxygen is displaced from the zone occupied by the fire, as in the case of using inert gas extinguishing systems. The most important thing is that oxygen is not displaced from zones not covered by fire (e.g. escape routes) as is the case in gas systems, but only from the zone directly occupied by the fire.

The huge evaporation area of the water also means very effective cooling of the fire zone. The evaporation of one liter of water from the fog system consumes more than 2500 kJ of thermal energy from the environment. Thanks to this, we effectively fight fire, while protecting people and material goods from the effects of heat. The protective effect is further enhanced by the barrier of water mist for thermal radiation.

Construction of a fire-fighting fog system

The main element of the system is a high-pressure aggregate with a water tank and control and standby automation. If a fire is detected, water under high pressure is distributed to fogging nozzles installed directly in the protected rooms. The whole is supervised by a system of reliable pneumatic sensors. An increase in temperature near any of them causes a pressure drop in the detection circuit and an immediate transition to extinguishing mode with simultaneous activation of acoustic signaling. The system is equipped with an uninterruptible power supply module UPS, completely resistant to power outages. At any time, the system can also be started manually in the event of a potential fire danger or to check the correct operation. 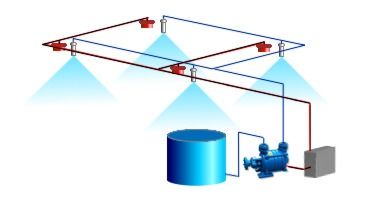